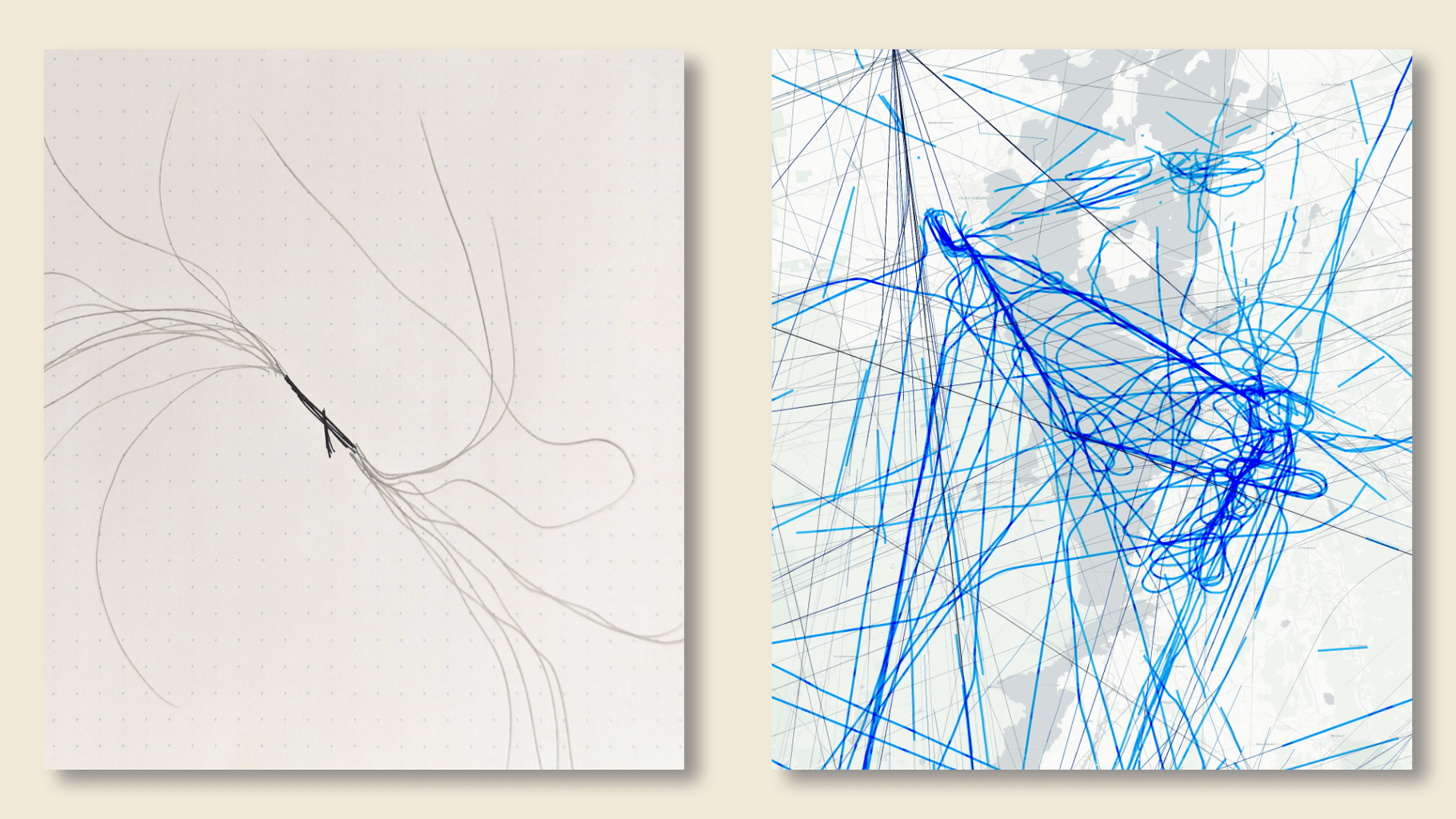 I've always wanted to use aircraft flight paths for data visualization because it is an interesting, relatable dataset which also has an organic quality to it. The data is also very big and hard to come by, which would present a technical challenge for me to consume and visualize.

I decided to start by trying to determine the pattern of how airplanes fly around my hometown of Burlington, Vermont.

First, I turned to FlightRadar24 to try to parse their flight data. I reverse engineered their API by watching network traffic on each page. After creating a scraping script in development, the API blocked me when I tried to scrape too much data too quickly.

To see the development process, check out my Twitter thread from March 2018.

The final code can be found on this Gist.

Screenshot of the Gist

Since I could no longer hit the FlightRadar24 API, I looked for alternative sources of data. I found FlightAware which had very cheap rates. Paying a less than a penny per API call removed the risk of being blocked for hitting a rate limit.

Since the API was totally different, it required a new pattern of API calls to achieve the same results.

I used the change in API to change the purpose of my data exploration. I've always wondered what I'm looking at on the ground when I get a window seat on a flight. Instead of doing a mass data visualization, I decided to switch to an "App" like experience that simulated a flight path. I built it using Electron and fully version controlled the project on GitHub.

I made a lot of progress, and I had a lot of fun, but I ran into some dead ends. I built the initial prototype using historic flight paths, and I was loathe to refactor it to support future flights. The nail in the coffin, however, was the approach web mapping tools take to viewing angles.

For the app, I wanted a "point of view" angle, where the camera would be centered at the latitude and longitude and altitude of the actual flight. Unfortunately, web mapping libraries take a different approach. They instead take a fixed location on the ground, and move the camera to an angle around it.

Some time later I noticed the great data vizzer (with a great name!) Topi Tjukanov was messing with flight data as well from a service I hadn't discovered in my Googling.

I was excited to discover ADSBexchange.com provided a live feed, as well as a queryable URL. I worked for a while on fetching data with URL query strings, but ran into rate limits again because they didn't build that endpoint for scraping.

In the end, I settled for downloading their daily 10GB archive of 1,440 JSON files, each representing 60 seconds worth of worldwide flight traffic. I eliminated the need for API calls, trading that for processing mountains of text files instead.

I can now create a single GeoJSON of every flight in the dataset that intersects a bounding box. Each line segment represents 60 seconds of a flight, and includes a few attributes to allow for different data visualization.

I start by getting a list of all files in the daily dump folder. Then I begin the main loop by going through each file one at a time. I bring each file into memory as a JSON object and then filter out the flights that are not within the bounding box. The remaining flights are hand-crafted into a valid GeoJSON object. Each Feature gets attributes assigned to it along with an empty array of coordinates.

After doing that process for 1,440 files and thousands of flights, I create a ReadableStream and .push() the final GeoJSON object into it. Afterwards, I .pipe() that Read stream into a Write stream. I don't know if this is the best pattern, but it's the best I could scrape (heh) together based on the StackOverflow and blog articles I came across for writing large files with Node.js.

Here is the resulting script:

I already have a few other areas that I want to explore.

Here are some cool renders from the data.

Interested in other big data visualizations I developed in tweet threads? Check out this recent project to represent land use with simple icons.